Will Naked Short Selling Make a Comeback in 2019? 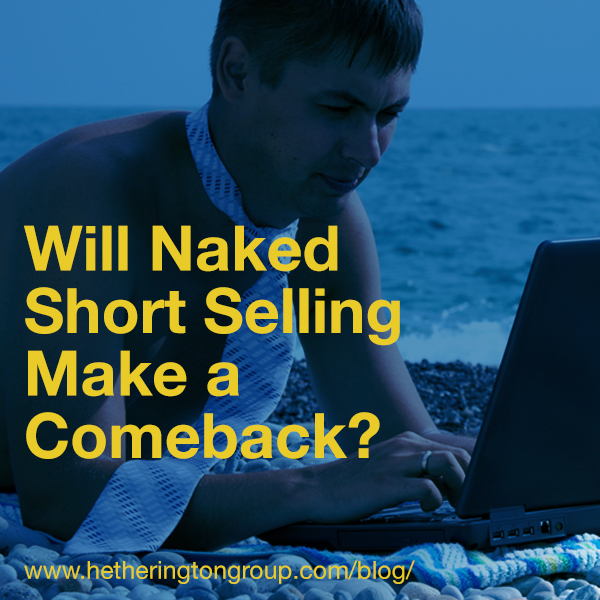 This is the fourth in our 5-part series on the most common types of financial fraud—Ponzi Schemes & Manipulation, Backdating Stocks, Insider Trading, Short Selling, and Pump and Dump Schemes—and how due diligence investigators can protect your company’s assets and investments by tracking down fraudsters.

Many investors “Go Long,” meaning they purchase stocks with the hope of gaining returns as the price of the security increases. A short seller, on the other hand, borrows on a stock and sells, hoping the price will decrease.

A third type of investor is known as a Naked Short Seller. No, this isn’t the story of a guy sipping mai tai’s on a tropical beach in his birthday suit (although he could be and not be committing fraud!).

Our Naked Short Seller, let’s call him Bob, has, in essence, no shares to borrow or short. Bob’s sipping his tropical fruit drink and begins selling shares from Company X knowing he has no intention of delivering. His only intention is to drive down the market, a.k.a., market manipulation.

As the crisis in confidence spread throughout the capital markets, naked short sellers targeted financial institutions and spread rumors and false information. The impact of this market manipulation became self-fulfilling. As short sellers drove down the stock prices of financial firms, the rating agencies lowered their ratings because lower stock prices made it harder to raise capital and reduced financial flexibility. The downgrades in turn caused lenders and counter parties to reduce credit lines and then demand more collateral, which increased liquidity pressures.

In the midst of the 2008 financial crisis, the SEC codified Rule 204T. Under that rule, Bob has to deliver within 3 days after the trade. If not, a “failure to deliver” (FTD) is identified, and penalties start to mount if the transaction doesn’t occur by the beginning of the next trading day.

Perhaps the most famous denouncer of naked short selling is Patrick Byrne, chairman and CEO of Overstock.com, who alleged that Merrill Lynch, through naked short selling, was drawing down the online retailer’s stock prices even while its revenues were flying high. Bloomberg News’ fascinating short documentary analyzes how stock manipulation put Overstock.com on the verge of collapse, despite stellar financial success. In January 2016, Merrill Lynch settled Overstock.com’s claim with a $20 million payout.

As fraud investigators, we are ethically bound to keep track of myriad regulations and amendments to international and federal laws. We can’t predict what will happen in 2019, but there’s whispers in the air that the SEC might be considering a reevaluation of Rule 204T. According to Aaron Elstein of Crain’s New York Business, right before Americans sat down for turkey and football in late November 2018, the SEC announced it might revisit naked short selling rules.

Last September Forbes’ Richard Levick raised three important questions that are sure to be looming well into 2019:

First, will the powers that be (like SIFMA) find ways to indefinitely neutralize adequate regulatory resources? Second, why has the SEC been historically hesitant to implement aggressive regulation of naked short selling? Third, most importantly, what justification is there for naked short selling under any circumstances other than honest clerical errors?