Girl: Keep That Fire in Your Belly 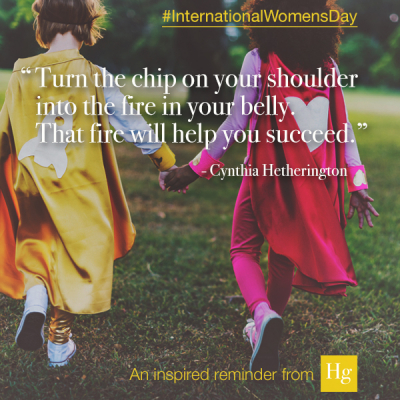 I have always looked up to my father. He still is my go-to guy when I have questions on business, life, and construction. He ran a electrical contracting firm right from my house, so all I saw were the guys who worked for him, electrical tools, vans and equipment, and work ethic like non-other. My brother, years ahead of me, became an apprentice for the summer when he hit his teens, so I thought I would be in the same boat when my turn came, but my dad said, “no.” I protested: “But my brother is your apprentice, why can’t I be?”

My father cherished and supported me then as he does now, but he also was deeply protective of me. His jobs often took his crew to dangerous and seedier parts of town, and he didn’t feel it was safe for me to accompany them. And truth be told, I really wasn’t mature enough to handle the manual labor required of the position. My grown-up security-minded self thinks this was the right call, but explain that to a 12-year-old who wants to make a few dollars and hang with her big brother and dad. Dad’s “no” was probably the best gift he ever gave me, as it put a chip on my shoulder.

Little did I know his words would ignite a fire in belly—one that didn’t take flame until well into my twenties … when I took a job as a stage electrician. For several years, I walked around with that chip on my shoulder, hard working, respected but aggravated, because I was female and stood out from my coworkers. So I did what many aggravated women do: I complained to my mother. She stopped me in my tracks and said, “You can do anything you want, if only you try for what you want and grasp what you get.” Mom pointed out that competing with the boys is noble—but not always the best use of my skills—and to consider my school more seriously. In other words, work with my brains and not with my attitude.  Both parents saw that chip on my shoulder, but they knew how to direct my energy and, at just the right moment, point me towards a path that was best. They set me on fire!

This fire catapulted me into college, where I discovered research and the world of information science, and, ultimately, where I am today: A woman intelligence officer and a cybersecurity expert in a field still primarily dominated by men in black suits. Cybersecurity Ventures estimates that by the end of 2019, a mere 20% of women will be in the global cybersecurity workforce, up from 11% in 2013. The National Center for Women & Information Technology (NCWIT): In 2017, the number of women working in IT was a mere 26%, with women of color representing only 10% of that number (5% Asian, 3% African-American, and 1% Hispanic).

Change is in the Air

Last month, I had the privilege of presenting the keynote address at the 2018-2019 Aspirations in Computing Awards, sponsored by NCWIT and hosted by CybHER at Dakota State University, a program, founded by Dr. Pam Rowland and Dr. Ashley Podhradsky, whose mission is to “empower, motivate, educate, and change the perception of girls and women in cybersecurity.”

NCWIT recognized the achievements of 35 young high school women who are active and interested in computing and technology. The NCWIT-AIC program seeks to “encourage persistence in computing through continuous engagement and ongoing encouragement at each pivotal stage of educational and professional development” for female technologists, from K-12 through higher education and beyond, as a means to increase women’s inclusion in the information technology field.

Since its founding, AIC has awarded nearly 11,500 young girls and women. From 2012-2017, the number of university degrees awarded to women in 37 colleges consulting with NCWIT jumped from 13 percent to 18 percent.

Given the limited number of women in this ever-growing industry, this collective initiative is trailblazing the path for many to enter an exploding career with lucrative salaries. NCWIT reports that 3.5 million computing-related jobs will be in demand by 2026, but at the current rate only 17% could be filled by U.S. workers holding a bachelor’s degrees. 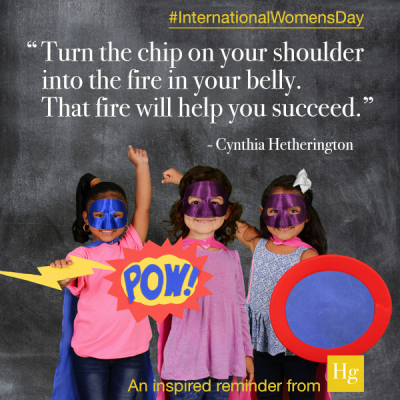 Without an education, a woman’s access to a profession that is safe and well-paying with benefits is greatly limited. When women are banned from holding certain jobs, equality is abandoned. It isn’t an anomaly that when legislatures are comprised mainly of men, equality laws are often lax or nonexistent.

As daunting as it might be for a young woman embarking on a career in the 21st century, I was inspired by those I met at the award ceremony. Bright, insightful, curious, and strong, these future leaders are their own trailblazers. In my keynote, I challenged them to push the chip off their shoulders and listen to the fire in their bellies:

A few days after the ceremony, I received an email from one of the recipients. She’d been trying to obtain IT internships and join her school’s IT competition team but hadn’t achieved her goals and felt like giving up. Here’s what she wrote:

Let’s just say you were the swift kick in the pants I needed to stop feeling defeated and to keep trying. I created new goals and wrote them down. They’re in a place where I see them every day. I just wanted to say thank you. Thank you for reminding me that hard work will get me farther in this field than talent or dumb luck. Thank you for showing me I don’t want free handouts, or my hand held to get the success I want. Thank you for reigniting that fire in my gut.  Thank you for saying what I needed to hear.

I recall sharing something similar to a mentor of mine many years ago. I am forever grateful for those who came before me and for those who helped me along the way to be where I am now. I am humbled by this young girl’s strengths and commitment.

It’s mentors who keep us on path, challenge us to try and grasp what we set our sights on, and to help pick us up when we fall down (and we all do). To all the women—young, middle aged, and rowing north—I applaud you on this #InternationalWomensDay and challenge you to keep that fire in your belly burning bright!

Cynthia Hetherington, MLS, MSM, CFE, CII is the founder and president of Hetherington Group, a cyber investigations consulting, publishing, and training firm. She is a leader in due diligence and corporate intelligence investigations, has authored three books, and publishes an industry newsletter. Ms. Hetherington has trained over 180,000 security professionals. In 2012, she was awarded the James Baker Speaker of the Year by the Association of Certified Fraud Examiners. Enterprising Women Magazine honored Ms. Hetherington with a 2019 Enterprising Woman of the Year Award, and she is shortlisted for the coveted 2019 Women in IT New York’s Entrepreneur of the Year Award.