Finding Business Assets: Getting Blood from a Stone 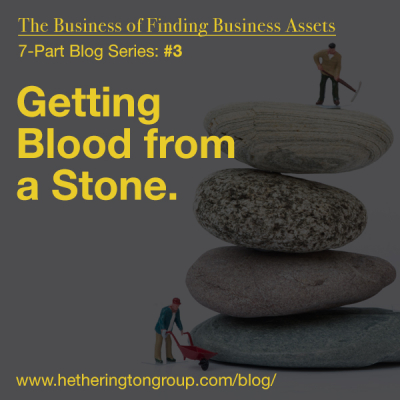 In this 7-part series, we get into the nitty gritty of how Hg conducts business asset investigations for our clients. Last week, we discussed pre-assessing before filing a lawsuit. This week, we dive into collecting on a judgment.

Finding assets of the debtor party is one of the most common reasons an investigator is hired for an asset search. If last week’s case study hadn’t turned out as well as it did, our client would have hired an attorney to collect the back rent due to him, after I had determined what additional assets the bookseller had. This would have included asset searches for real property, personal property, investments and trusts, intellectual property, and subsidiaries and spin-offs.

Even lawsuits can have liens placed on them. A physician can place a lien on a pending lawsuit that involves an injury to his client. For example, if a carpenter is hurt while working on the job and sees a doctor, but he doesn’t have health insurance or funds to pay for the medical care, the doctor can place a lien on the carpenter’s pending lawsuit against his employer. When the case closes and the money is doled out, the attorney is paid first, the physician second, and the individual last.

Once a judgement is put in place, it is up to the claimant to keep an eye on collection. There may be a judgement outstanding on an individual, but meanwhile the debtor may be acquiring extra property, cars, boats, and making investments. An investigator can be hired to track the debtor’s activities until the judgment has been paid, or the claimant can sell the judgement to a judgement collector who then has the legal right to attach the debtor’s assets and go after them themselves. However, assets don’t always mean cold cash.

Getting Blood from a Stone

One night, I was swapping stories with a group of judgement collectors who had just finished up an Hg training. As the evening wore on, we all got an ear full of the funniest, scariest, and oddest things they had recovered over the years.

One woman shared her story about a man who owed about $5,000 on a judgement she was trying to collect. She drove down to meet him on his property in northern California, where he lived in an old log cabin in the backwoods. She did an assessment of the property and determined, from the looks of it, her three-hour trip was for naught. Getting $5,000 from him would be like getting blood from a stone.

He greeted her sheepishly, and, proceeding with caution, she asked him about his occupation. He went on to tell her about his landscaping and tree maintenance business. When she asked what he did during the winter months, he raised his arms in a sweeping motion and said I’ve got wood to sell.

She quickly realized that his asset was wood and that her fireplace burned through a fair amount of it during the damp, cold winters of southern Oregon. She informed him that instead of collecting $5,000 cash on the judgement, which she knew she’d never see, she’d take wood for her fireplace as payment.

A week later, a dump truck dropped 10 cords of wood on her driveway—and that was only half the payment!