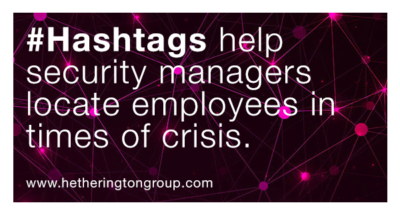 Long gone are the days when first responders showed up at a crime scene and risked serious injury or death during the process of diffusing a bomb. For decades, these elite responders have relied on robotics and intelligence to help keep them from harm’s way. Today’s bomb disposal robots are capable of entering a building, locating the bomb, handling the precarious object, and diffusing it. In warfare, drones are used to identify and destroy nefarious enemies and caches of weapons. Security officers have the backup of unmanned, multi-terrain, mobile sensors to scour airport perimeters 24/7.

Another far less costly, yet highly effective method of protecting employees—and locating them in times of crisis—is through social media. For several years, Facebook has provided a Crisis Response place to help friends and family check themselves as “safe” during a crisis. Most recently, it was enabled in the United States shortly after the terrorist attack in Lower Manhattan, but it was also widely used during this year’s devastating hurricane season.

In late August, Hurricane Harvey pummeled Texas and parts of Louisiana, dropping over 50 inches of rain in some areas. Hurricane winds downed power and telecommunication lines; explosions broke out at a chemical plant outside of Houston; roads were described as rivers. Harvey’s damages are estimated at $198 billion.

With thousands of employees on the frontline in multiple states, security managers for electrical, manufacturing, and pharmaceutical companies needed a way to locate their employees and ensure they made it safely through the storm.

As employees were navigating treacherous conditions, they were also checking in with worried family and friends via social media. As social media investigators, Hetherington Group’s investigators were able to assist company security teams in tracking the location and safety of their employees by analyzing their social media posts on Instagram and Facebook.

And then came Irma … 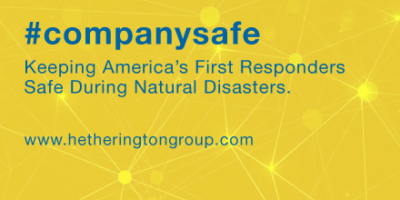 With barely a breather from Harvey, Irma reared her ugly head. Hurricane Irma—the strongest Atlantic basin hurricane outside the Gulf of Mexico and the Caribbean Sea on record—tortured residents on Caribbean Islands and nine states for twelve days. Tens of thousands of first responders descended upon Florida and other Southeastern states and are highly credited as being the “Angels of Irma.”

But who’s there to help the security teams trying to locate missing employees?

Luckily, Hetherington Group had learned an important security lesson from Hurricane Harvey and quickly developed a hashtag tracking system for security managers to distribute to their employees battling the next major natural disaster. We distributed a company-wide hashtag #companysafe [insert your company name] for all employees to use when they checked in on their social media. Dozens of employees used the hashtag during Irma’s wrath, providing company security officials a point of contact to assist their staff and offering peace of mind that they were safe and accounted for.

While many large and international companies have employee emergency systems in place, they are often complicated and stretch across multiple platforms. When time is of the essence—and when isn’t it during a crisis?—nothing beats the ease of using technology most everyone is familiar with to ensure employee safety.