With the first Democratic presidential primary 6 months away, vast swaths of Americans are being bombarded with television ads and 24/7 news coverage in the highly contested race. While out on the campaign trail, reporters and opposition researchers alike will be scrutinizing candidates’ voting records, former employment, affiliations, and business dealings. In the era of Twitter, Facebook, and Instagram, what a candidate posts (or posted in the past) can also be placed under the microscope.

Social media can often make or break a campaign. It is not only important for politicians to be cautious of what they post during their campaign, but also of what they have posted on social media in years past. Investigators and journalists are diving deep into politicians’ social media accounts looking for discrepancies between past and current campaigning opinions, but what if the posts they are hoping to find have been deleted?

Searching by name or topic will generate a list of twitter posts, including the handle, elected position and state, and political party. It will also note when the original tweet was posted and how many seconds, minutes, hours, days, or months lapsed before it was deleted. You can also narrow your search by choosing a specific state.

A search for “selfie,” for example, generated over 20 pages of tweets. With 20 tweets per page, that’s a lot of data to mine, so it’s recommended to narrow your search as much as you can by including additional information such as name and state. 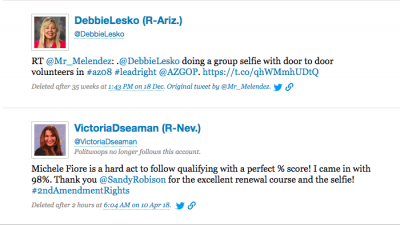 In this case, you can see that Victoria Seaman, a former Republican member of the Nevada Assembly, is no longer being followed, because she no longer holds office. The post was deleted 2 hours after its initial post on April 10, 2018.

The other tweet, first posted by Debbie Lasko, an Arizona Republican member of the U.S. House of Representatives, was deleted 35 weeks after it was originally posted on December 18, 2018.

Clicking on the “link” icon, will often offer more information about the deleted tweet. This tweet by Senator Gary Peters of

Michigan, for example, was deleted and replaced with a second one—presumably due to the incomplete sentence in the first. Clicking on “the next tweet” will redirect you to his main Twitter account and the updated post.

Like what you’re reading? Become an Hg member and learn how to maximize your online investigations with shortcuts, tips, tricks, better investigative tools, and advanced research techniques for all skill levels in our Data2Know newsletter, published eight times a year. As an added benefit, subscribers get access to our Opt Out Index containing over 200 active links to assist you in getting your private data off the Internet. From Abika to ZoomInfo, we’ve got you covered!