An Hg Case Study: Tracking Down Prior Ownership 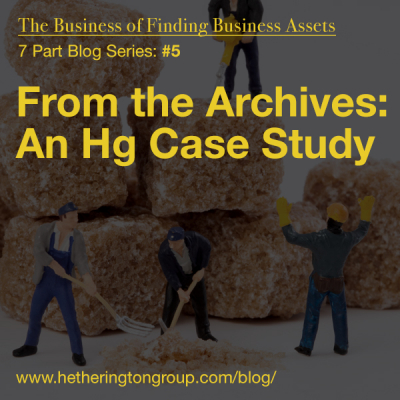 In this 7-part series, we get into the nitty gritty of how Hg conducts business asset investigations for our clients. Last week, we discussed how investigators can protect investors from potential fraud by locating a project’s funding party or mysterious new investor. This week, we discuss finding prior ownership of an old asset such as a product or property.

This type of business assets investigation is more likely to happen in property cases. If a company purchases a property from another, the purchasing company needs to search for all liens against the property to ensure it is not buying bad debt.

The purchasing company also needs to conduct a geographical survey of the land, because it could be getting more than it has bargained for. Many early industrial plants stationed near waterways, railroads, and major byways were unregulated polluters that created toxic-waste areas now designated as superfund sites. Today, the Environmental Protection Agency (EPA) forces the current land owner to clean up the area, resulting in millions of dollars in expenses that the owner may not have anticipated. In Hg’s home state of New Jersey, there are 116 superfund sites—the highest in the country. Followed by California (98), Pennsylvania (95), and New York (93).

Another issue of concern is potential claims against an old product, such as a worker’s tool. What if the product fails and the worker is injured? Who is sued? The former owner of the company, or the new owner?

Because the Garden State is marred with so much contaminated land, it’s no wonder Hg often takes on superfund asset cases.

Some time ago, one of Hg’s company clients had moved into a plan that was situated in an urban area of New Jersey. Ten years later, the EPA inspected the grounds and declared the property a superfund site. The current manufacturer was producing a non-toxic product. Historical research on the building showed that the original factory was used as a smelting factory. All the burn-off of the metals had leeched into the ground and poisoned the ground water. The company hired me to locate the owners of the original plant.

A deed search was straightforward, showing who owned the property. The difficulty was that the deed owners were companies that changed hands year after year, and the assets and liabilities were split. The original firm was Jersey Smelting from the 1860s. It was sold to a large, publicly traded firm that merged, split, and was bought and sold more than a half dozen times, because the company kept shifting and growing.

Two sources were really instrumental in my search for this company’s ownership: Moody’s Investor Services and local newspapers. Luckily, my former librarian self was adept at using the microfilm and microfiche machines at my local public library. I spent countless hours sitting in front of the machines, spooling through issue after issue of newspapers for any mention of the building location, any fires, events, sales, etc.

One piece really jumped out and helped clear up something the attorney had presumed as truth based on a history book of manufacturers in the city during the mid-1800s. She read that Jersey Smelting was sold to Paterson Smelting, leading her down a rabbit’s hole trying to track down information from state archives for an entire day. To no avail, she couldn’t confirm that a sale had occurred.

An article I had found on microfiche contradicted her version. In scanning the original newspapers, I discovered the book’s author was incorrect in saying the company had been sold. The newspaper stated that the Jersey Smelting factory was leased, not sold, to Paterson Smelting. Hence, the assets were still with Jersey Smelting until it merged with a completely different company, which later sold its smelting practice to a foreign corporation.