This is the first blog post in a two-part series on how investigators can and should be using Reddit in their online work. 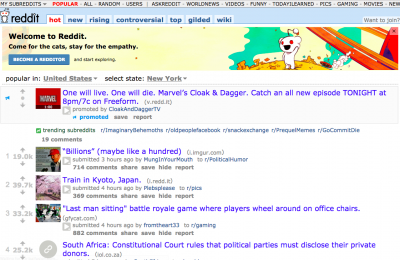 Whether you’re tracking items on the Dark Web or trying to get a story from remote locations, Reddit can be a powerful resource in your OSINT toolkit. Investigators are increasingly using the social media platform to locate savvier social media users, Dark Web matter, and items needing instant recognition.

It’s also beneficial to security practitioners trying to get a story from remote locations. Take the Turkish coup, for example. Major media outlets were suppressed, but social media users were posting on their boards in real time what was happening in their neighborhoods. The content was quickly aggregated on Reddit boards, and someone working in an operations center a country away could get an inside perspective of what was happening on the ground, circumventing the need for delayed media reports.

How does it work?

With the tagline, “Come for the cats, stay for the empathy,” it might be hard to take Reddit content seriously at first blush. But it is. Reddit has become a vital portal for capturing under-reported news and boots-on-the-ground perspectives—invaluable information for investigators. While searching for information, however, don’t be surprised to stumble upon the obligatory cat video.

Subreddit is the moniker for a focused community on Reddit. Anyone can create and monitor a subreddit. Each subreddit is hosted by a moderator and comes with its own rules regarding posts. Names of subreddits begin with a lowercase r followed by a slash and the name of the subreddit topic.

r/osinttools is a focused community on OSINT tools.

As you cruise through the various Reddit and subreddit boards, you can vote on stories with upvotes or downvotes. Think: Facebook Likes or Twitter Hearts. Unlike Facebook and Twitter, however, a Reddit upvote or downvote has a direct impact on the story’s ranking. Upvotes by the community will draw a story to the top of the feed, and downvotes will push a story to the bottom.

Opinions are rampant on Reddit; everyone seems to have one, when it comes to commenting on available story lines. Discussion on any post is considered valuable content to the readership. It offers additional information, debate, and opinion—the latter of which may be polarizing or simply flat out funny.

Reddit’s onsite mascot and registered trademark, Snoo, is a small creature with red eyes and a single bent antenna protruding from its head. Its name is a play on ’Snew, as in “What’s New?”—the intended, but already-taken, original name of Reddit. The Snoo image changes with each new subreddit topic. If you see Snoo in online content you are reviewing, you know the content came from Reddit.