Finding Business Assets: How to Save Money with an Investigator 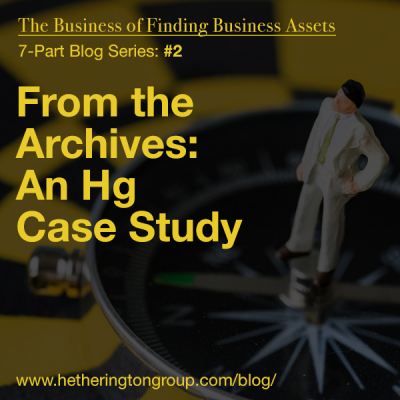 In this 7-part series, we get into the nitty gritty of how Hg conducts business asset investigations for our clients. Last week, we highlighted six reasons clients come to us for an investigation. This week, we will explore pre-assessing before filing a lawsuit.

Looking for assets can be a costly endeavor for clients, depending on how hidden they may be. In the case of a client who has not been paid and seeks to file a lawsuit against the debtor, it is important to know whether filing a suit is a waste of time, money, and energy. During a business asset investigation, an analyst will research and locate the party’s assets. In some cases, the outstanding debt may never be collected because the debtor has nothing of real value or has run out of funds and can no longer sustain his own business.

I received a call one Friday afternoon from a longtime client for whom I had performed quite a bit of due diligence in the past. He was “fuming mad” about a renter of his who had leased ~10,000 square feet of mini-mall space for his new and used bookstore. Apparently, the business owner was three months behind in rent—unusual because she normally paid on time. Whenever my client called the owner, a store employee would play duck and cover for her, saying she wasn’t available.

My client was planning to hire his attorney to draft a letter threatening a lawsuit if the rent wasn’t paid in short notice. Feeling bold, I told the client that I would not only able to recover the unpaid rent but that I would do so for less cost than the attorney fees. He took me up on my offer.

I began by running a D&B report. It appeared this small, independent bookstore had been very successful with a steady stream of loyal customers for three years. Her D&B showed increased revenues for the last two years, but there was a red flag in the vendor payments section with an over 90-day payment history on several accounts. It was obvious that the landlord was not the only creditor not getting paid.

To determine if an event occurred three months prior that may have played a factor in the business problems, I searched local newspapers. I found that a month prior to the start of the payment problems, a large bookstore chain opened a few blocks away and was attracting the community with special member offers, a fancy coffeeshop, and lounge areas.

Figuring this explained why the business might be struggling, I visited the small bookstore (I’ll always be a librarian at heart!). In a discreet, casual chat with the clerk, I uncovered a wealth of information.

Me: “I see that new bookstore chain opened around the corner. Have you checked it out yet?”

Clerk: “Yea. They opened a few months ago. I checked them out when they first opened, and they’re awesome! They sell a whole bunch of stuff besides books, and you can order a coffee and browse whatever you want as long as you want.”

Me: “No kidding! Maybe I should go there (laughing), but I do like to support small bookstores, because of great customer service. How are you guys managing to stay afloat with such a heavy competitor around the corner?”

Clerk: “Just barely. This store will probably close when the boss gets back. We’ll move the books to her other store.”

Me: “Oh good … you have another store? [Neither my client nor I knew this!] Where is it, so I can be sure to visit you there?”

The clerk gave me the address to the other shop, which I placed in my bag for future research.

Me: “It’s a bit farther but not too bad. When do you think you’ll close this store? I’d love to come back before you move.”

The clerk told me that the boss would be back in two weeks after returning from England. She’d been there the entire summer; her father was dying, and she was coping with her family overseas as well as her family in the U.S.

Returning to the office, I researched the second bookstore and found it was indeed owned by the same woman, and it was in much better financial shape. After reporting this news to my client, he took an interesting plan of attack.

When the owner returned, my client visited the store. He showed surprise when the store owner told him about the death of her father, the difficult trip home, two families, two cultures, and the competition moving in, and her mistake in having her next-door neighbor mange the store while she was away. Since my client knew most of this information already, he was prepared.

He smiled and told her he understood, giving her two months to make up the undue rent payments. There were no threats, no lawyers, no anger—just a compassionate landlord who empathized with family issues and competing markets. He did take an opportunity to suggest that the owner could always rely on her other store to carry her through the hard times—letting the her know he’d done his research.

Within two months, our client collected all his back rent and talked the bookseller into relocating her shop to another location, away from the competition, but still within the territory and on his books.

Not only did our client not have to sue and create judgments and liens on this woman—costing him attorney fees and headaches—he maintained a valuable client relationship.