Like a Deer in the Headlights: Tracking Down Instagrammers 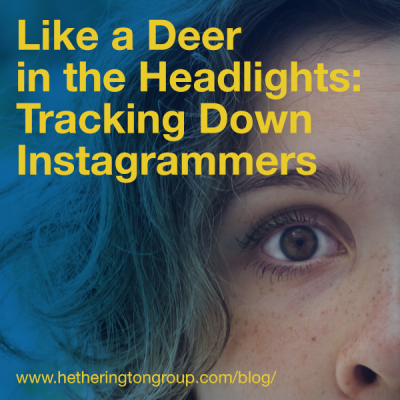 While your mom and next-door neighbor may happily be posting pictures of the last family birthday party or a deer in the front yard, there are social media sites less common to the average user. The arrest of Robert Bowers, the accused shooter of the Tree of Life synagogue, has shed light on Gab.com, a lesser known social media platform that has been called a popular discussion board for “far-right extremists.” As of October 29, according to founder and CEO Andrew Torba, the site has been taken down until it secures a new hosting provider.

As OSINT investigators, we need to be aware of the hundreds of social media platforms connecting millions of users daily. Some platforms, such as Facebook, require a real-life person to be associated with a personal account. Others, such as Instagram and Twitter, can be created in minutes, and a user can hide behind a made-up handle like “@josephine2Bsummer” and the average user has no idea who is behind the account.

This week, Hg discusses two social media platforms that can help both the seasoned and newbie investigator track down images and people.

Picdeer locates and displays Instagram content and analyzes a user’s Instagram statistics. You do not have to have an Instagram profile to use the website. Picdeer displays most-liked medias and most-commented medias and analyzes a follower’s growth while exploring Instagram users and their postings. You can browse users, hashtags, or photos using a specific key word.

Among the statistics provided are who is not following you back, who you are not following back, your most liked posts, and your most commented posts. Picdeer also allows the user to create Instagram lists—quite helpful when needing to browse feeds chronologically in an investigation.

A recent search for Rajon Rondo, @rajonrondo, point guard for the Los Angeles Lakers, informs us that he has posted 145 times, has 1.07 million followers, and follows 157 other Instagrammers. He has been tagged by other users over 52,000 times. His posts have been liked 821K times and have received 12K comments. Picdeer also provides you with a running list of his posts, along with the number of likes, the number of comments, and the dates they were posted.

Mastadon is a good place for investigators to consult during a social media investigation. Mastadon, a free open source microblogging platform, states it is the decentralized alternative to commercial platforms such as Twitter—meaning a user can control how their information is used instead of being sold to third parties. You might discover that an individual who chooses to avoid mainstream social networks uses Mastadon to keep a more low-key social media profile. A Mastadon user creates or joins what it calls an instance, where the user can create their own rules, including increased privacy settings and banning negative conversation. A user Toots or Boosts a status similar to the Tweet and Retweet function of Twitter.

Like what you’re reading? Become an Hg member and learn how to maximize your online investigations with shortcuts, tips, tricks, better investigative tools, and advanced research techniques for all skill levels in our Data2Know newsletter, published eight times a year. As an added benefit, subscribers get access to our Opt Out Index containing over 200 active links to assist you in getting your private data off the Internet. From Abika to ZoomInfo, we’ve got you covered!